Time to Change the Donuts 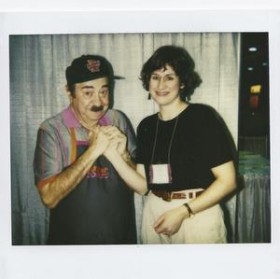 This post originally appeared in March 2012 and remains one of my most popular. Updated on July 10, 2020.

That’s me in the Polaroid instant photo with actor Michael Vale, better known as Fred the Baker, or the guy who used to utter “Time to make the donuts.”  Mr. Vale was at the Dunkin’ Donuts National Convention at Disney World in 1996 to grace franchisee and employee fans like me with a photo opportunity.

Mr. Vale had been portraying Fred the Baker for 14 years by the time we had our brief encounter.  Much had changed for Dunkin’ Donuts in that time.

In 1995 Wendy’s International purchased Tim Horton’s, a donut and coffee chain that was beating Dunkin’ handily in the Canadian market, and threatened to expand that chain into the U.S..

Company ownership changed. Allied Lyons bought Dunkin’ Donuts in 1990. In addition to gaining Baskin-Robbins as a sister company, Dunkin’ management now had to take Allied’s desire for return on investment into account.

Health consciousness surged. The 1980s and 1990s marked the appearance of several diet programs (The Beverly Hills Diet, Jenny Craig, Optifast, The Zone Diet) and the explosive growth of others (Weight Watchers, Atkins).

Meanwhile, back at the ranch, Dunkin’ management wanted to make the business more attractive to franchisees and more profitable.

The Early Shift to Coffee

It was clear that Dunkin’ would need new products and a new approach given the external forces above that were bearing down on the company.

Dunkin’ shifted its emphasis to coffee, which was less labor intensive and more profitable than donuts.

What does all this have to do with Fred?  Well, as the guy who made the donuts, he represented our past but not our future.

As the changes were occurring, a close observer could see the shift already in the commercials he did.

In the 1980s Dunkin’s commercials focused on doughnuts (like this Fred classic) and how Dunkin’ made them fresh daily in contrast to supermarkets’ stale offerings.  Supermarkets were Dunkin’s major competition at the time.

By the 1990s, Fred was serving coffee in some commercials.

Ultimately though, we needed a fresh start.  After research showed that our customers would allow us to move beyond Fred if we treated him well, we threw him a huge retirement bash complete with a parade in Boston and a free doughnut day for customers.

Every brand has external forces exerting pressure and willing it to evolve.  As the steward of your brand, you need to track these changes and evolve the brand to take advantage of them.  Done well, brand evolution can position your brand as a market leader.

Ignoring changes in your market and business environment is the ostrich approach and can kill your brand.  Look what it did to the brand that helped produce my photo with Fred.

Polaroid concentrated on its iconic instant camera too long – first in the face of one-hour film processing at retail outlets and then as digital cameras appeared.  The company filed for bankruptcy in October 2001 and sold its assets, including the right to the Polaroid name.

The name and the assets bounced from owner to owner. In December 2008, the Polaroid Corporation declared bankruptcy again.

In February 2008 on its second march to bankruptcy, Polaroid announced it would close its last remaining instant film factory in Enschede in the Netherlands.

Instant-film fanatic and online seller Florian Kaps bought the factory and launched The Impossible Project with former factory employees to resurrect instant film production there. (See their passion for the resurrection here.)

The Impossible Project rebranded as Polaroid Originals in 2017 when the CEO purchased Polaroid’s holding company. In March 2020 the company became just Polaroid.

Still the brand that was an American icon remains a shadow of its former self.

Brand Relevance is Defined by Customer Experience, Not Product

Where Polaroid went wrong was to focus on the product – the physical instant camera, film and paper – instead of building the brand around a purpose that fueled customers’ emotional attachment: instant memory capture.

Had Polaroid’s management used the brand’s ability to own the attribute “instant” to develop their digital photography market alongside their analog products, the brand might not have disintegrated.

Dunkin’ did not make that mistake. While the company shifted its product focus to revolve more around coffee, management knew the brand’s strength came from the role it played in customers’ lives.

Customers indicated that a stop at Dunkin’ was the way they recharged physically and emotionally. It was a treat they gave themselves, a way to keep them going the rest of the day.

This insight gave rise to the “America Runs on Dunkin’” campaign which launched in 2006 and continues today.

How Dunkin’ Has Remained Relevant

Dunkin’s shift to a coffee emphasis has been successful. By 2010, 60 percent of the Dunkin’ Donuts brand sales came from beverages.

But it is the continued focus on providing customers with physical and emotional fuel, along with convenience and speedy delivery that keeps the brand relevant and growing. 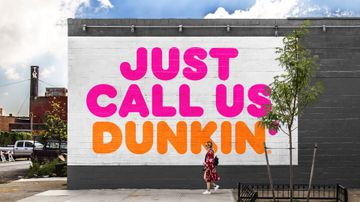 Recent ways Dunkin’ has evolved to remain relevant include:

No brand is immune to the need to evolve. What can you do to help your brand stay relevant?

In short, keep your eyes, ears and mind open.

I cherish that old photo with Mr. Vale, and remember the excitement of getting to meet him.

Do you remember Fred the Baker?

Subscribe
My Amazon Buyer Conundrum
The Pitfalls of Generational Marketing