I was oblivious to pop music until age 10.

That changed when my worldly 12-year-old neighbor came to my house and was dismayed to find that I was clueless about music. On her direction we took my parents’ radio from the kitchen and plugged it in in my bedroom. She spent the next half hour turning the dial to introduce me to stations and songs.

I began appropriating my parents’ radio on a regular basis. After the third time they found it in my bedroom, they bought me one of my own.

Fifty Ways to Leave Your Lover. The Hustle. Love Will Keep Us Together. Saturday Night. These songs became the soundtrack to my days.

If I did not like the song that came next, I just changed the station.

It soon occurred to me to purchase the singles I liked most. Bohemian Rhapsody was the first one I bought. My mother was curious about what I was getting into and asked to listen with me. I remember her trying to explain the song as operatic parody. I just liked it and wanted to listen. And now I could, over and over. 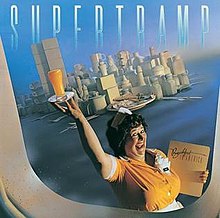 It took a few years for me to graduate to buying whole albums. Supertramp’s Breakfast in America was my first purchase. Later came Greatest Hits albums from The Eagles, Donna Summer and Barry Manilow. Hey, don’t judge.

Music became a topic of conversation among friends and something to enjoy together.

By the time I had children, vinyl albums had yielded to CDs. I purchased many of my favorite albums in that format and played them often as I drove. My kids got to know the music my husband and I liked as well as original songs from children’s musical artists like Laurie Berkner and Billy Jonas.

When our kids were in middle school we bought them iPods and were thrilled that they wanted to upload some of the music we had shared with them. They also purchased songs from iTunes.

Now nearly adults themselves, my kids don’t physically own most of the music they listen to.

Rather than spend money for music in a format that may not last more than a few years, my daughter and her friends chose to subscribe to Spotify.

Spotify Is Among the First to Stream Music Legally

If you are over the age of 40, the name Spotify might make you think of pretreating soiled laundry. Maybe that’s just me.

Spotify is a music streaming service founded in Sweden in 2006 and launched in 2008 as a way to legally stream music. Co-founder and current CEO Daniel Ek had a lifelong passion for music and was dismayed by the piracy scandals in the early 2000s (remember Napster?) and the way they hurt the recording industry. Building Spotify was his solution.

Indeed Spotify’s original mission was “Give people access to all the music they want all the time – in a completely legal & accessible way.” Spotify launched both free and paid versions of their service. Free service listeners were subject to ads interspersed between songs, while premium subscribers listened ad-free.

At the time Spotify wasn’t the only company trying to solve the legal-way-to-stream-music problem. Several services launched in the first decade of this century including Pandora (November 2005), Slacker Radio (March 2007), Deezer (August 2007) and iHeartRadio (April 2008).

Most of these services offered radio-like streaming experiences.

Spotify gave users control to select specific songs, to create their own playlists and to collaborate on playlists. Spotify also focused on growing their music catalog quickly to rival that of iTunes. This approach helped Spotify gain more traction than their competitors.

After a few years Spotify’s success began to gain attention in the industry.

Google Play Music launched its music streaming service on November 16, 2011. Apple Music burst onto the scene in 2015, after finally acknowledging that the MP3 download format was declining fast and streaming subscription revenues were soaring. Amazon Music Unlimited joined the fray on October 12, 2016.

After enjoying sizable market leads over its early rivals, Spotify realized their new deep-pocketed tech competitors had name recognition, large audiences and other revenue streams to fund their market entry. They would ramp up fast.

Spotify found itself a Brand in Adolescence in a market that had become Suddenly Popular.

With formidable new competition, just providing a legal music streaming service would no longer be enough to differentiate Spotify. The brand needed to evolve to maintain its market leadership.

Spotify’s management responded by conducting a company-wide redefinition of the brand’s values, accelerating its subscription efforts, exploiting its playlist abilities and leveraging its vast data stores.

Spotify calls employees band members and considers its culture a brand strength. In 2014 Spotify’s HR department embarked on an effort to redefine the company’s core values so that they resonated with everyone in the band. Dubbed “The Passion Tour,” extensive workshops and voting resulted in five core values: innovative, collaborative, sincere, passionate and playful, each with brief elaborations.

While rallying the band at home, Spotify management raced to grab more market share by introducing family subscriptions ($14.99 per month for up to six family members) and student plans ($4.99 per month) in 2014. In 2017 Spotify upped the ante by adding Hulu access to the student plan and in 2018 they added Showtime.

Spotify added new curated playlists and features to its collaborative playlists that allowed users to see who contributed and when. Users loved these features. My daughter mentioned that her tennis team collaborated on a playlist to psych themselves up for matches.

Spotify’s early lead in active users also provided a trove of data that they began to leverage in their relationship with artists in 2015 with the launch of Fan Insights. Fan Insights helped artists understand the profile and location of their listeners so they could market their music and site concerts more effectively.

In October 2017 Spotify relaunched Fan Insights as Spotify for Artists, providing musical artists with a profile page and more tools to manage their business.

As brand visionary, CEO Ek introduced a new mission in his Founder’s letter when Spotify filed for its IPO in February 2018: “to unlock the potential of human creativity – by giving a million creative artists the opportunity to live off their art and billions of fans the opportunity to enjoy and be inspired by it.”

Spotify’s predicament – finding themselves in a market that is Suddenly Popular – is a common among brands in adolescence.

Entrepreneurs opt to launch businesses where they see “whitespace” in the market, problems no one is addressing or demand no one is filling. If the market is big enough, they can gain traction and grow quickly.

At some point the fertile ground they have cultivated gets noticed and other players enter the market. The early entrepreneurs did the hard work of proving the market viable and the new entrants want to cash in on it.

The early entrant brands get pushed into brand adolescence because suddenly customers have multiple choices for what they offer.

The trick to surviving brand adolescence is to realize this situation early and redefine your brand to differentiate it and to assert your strengths. And that’s what Spotify did. Specifically they:

Spotify is the music-streaming industry leader right now. Apple Music is second and Amazon is third. Google revamped their music streaming options and added YouTube Music in June 2018 which allows users to watch a song’s music video while listening.

Spotify’s shot at surviving brand adolescence will ultimately hinge on its ability to become profitable and to compensate artists sufficiently. Artists currently receive a tiny fraction of a penny for each stream of their music – true for all the music streaming services. That will need to increase.

To reach profitability, Spotify will need to increase subscription costs and have users feel they are still getting value.

I believe they are on the right track and that they will survive and ultimately thrive.

Subscribe
Facebook: Can This Rebellious Brand in Adolescence Be Tamed?
A Winning Brand Recipe Crafted with Chocolate