Facebook: Can This Rebellious Brand in Adolescence Be Tamed?

It’s been a year since Facebook reported research that showed passive consumption of content on their platform can worsen moods, increase depression and stoke anxiety. Passive consumption includes scrolling to read posts and liking or reacting to posts via their emoji buttons.

My own experience supported their research. Last May I deleted the Facebook app from my phone to reduce the time I spent there.

Facebook’s research also said that having conversations there could boost your mood, but forcing conversation appealed less than just cutting my time there.

With the barrage of news about Facebook’s vulnerabilities and how it has exploited user data, my gut is inclined to delete my account.

Yet my kids prefer to use Messenger and WhatsApp, both owned by Facebook, to communicate when they are at college. Facebook has also connected me with high school and college friends with whom I would not have communicated otherwise.

Now that those connections are there, they are hard to give up.

Growth Spurts Catapulted Facebook’s Size Ahead of Its Maturity

Facebook has become such a fixture in people’s lives that it is hard to remember that Mark Zuckerberg founded the social medium in a Harvard dorm in 2004 and that it has only been open to the public since September 2006. Just over 12 years ago.

That was before its initial public offering in May 2012.

For the third quarter of 2018 Facebook reported 2.27 billion MAUs and $13.7 billion in revenue, on target to reach over $55 billion for the year.

Over the past year MAU growth has leveled off: it has stalled in the U.S., gone down in Europe, and registered small increases in Asia-Pacific and the rest of the world.

Like a gangly 14-year-old who sprouted six inches in a year, Facebook has both sought growth and struggled to keep up with it. And like that adolescent, the brand’s size has eclipsed its maturity level.

CEO Zuckerberg acknowledged this point in an interview with The New York Times on March 21, 2018:

“…Mr. Zuckerberg said that the company’s efforts to safeguard its platform from bad behavior …were an important part of a larger transformation at the company, which has had to adjust from its roots as a social network for college students into a powerful global information hub.”

The New York Times has also reported that Sheryl Sandberg, Facebook’s Chief Operating Officer, has been trying to appease lawmakers by saying that “the company was grappling earnestly with the consequences of its extraordinary growth.”

Efforts to cope included staffing up. Facebook has been hiring at a breakneck pace for the past four years, largely to get more eyes reviewing what is posted. Facebook employed 6,818 people in 2014. As of September 30, 2018, that number had multiplied fivefold to 33,606. 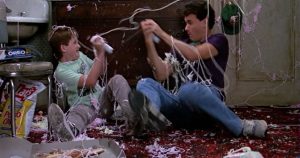 Zuckerberg and Sandburg would have you believe that Facebook as a brand is like Tom Hanks’ 13-year-old character Josh Baskin in the movie Big whose wish to be big is granted by a Zoltar Fortune Teller machine, transforming him suddenly into the body of 35-year-old man. 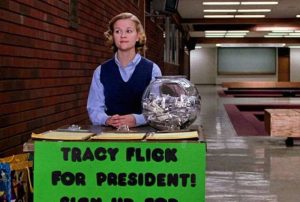 Revelations via company emails and newspaper investigations suggest the truth is closer to Reese Witherspoon’s ruthlessly ambitious Tracy Flick in the movie Election, whose sweet appearance belies her tactics to win.

The Rebellious and Self-Centered Brand in Adolescence

In June 2017 Facebook changed its brand mission from “to make the world more open and connected” to “to give people the power to build community and bring the world closer together.” Zuckerberg explained that the reason for the change was not only to get a diverse set of opinions heard but “to build enough common ground so we can all make progress together.”

Zuckerberg’s ambitions have fueled the company’s meteoric rise, but they have also occluded and downplayed serious issues that have come back to haunt the company.

Under Zuckerberg’s leadership Facebook has proven to be a self-centered and rebellious brand in adolescence.

The brand’s business success seems to have fueled in its leaders the idea that they could pursue their interests for the brand without worrying about the consequences. As consequences emerged, their reaction mirrored that of a rebellious teenager:

And like any rebellious adolescent, the brand has to want to change for change to be possible.

Given the leadership’s actions to date, it will take more than just company actions to address some of the ills that Facebook – and to be fair, other social media – have bred.

Facebook’s size and ambition have made it a social media leader. If the brand wants to maintain its leadership position it needs to learn from its mistakes, own its responsibilities and take action to restore users’ trust.

It may be hard to imagine life without Facebook and easy to think that it is too big to fail. But I can remember life before Facebook and I can be happy without it if need be.