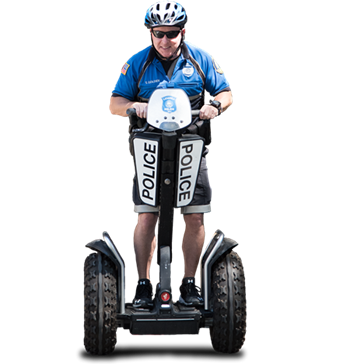 One summer day a few years ago I saw a parking patrol officer in the center of town roll down the sidewalk on a Segway Human Transporter (HT), stop at an expired meter and issue a ticket to the offending car.

The sight of him made me realize that I had forgotten to feed my meter.

I trotted over to my car, grabbed a few quarters and poured those babies into the meter.

In my head a Hollywood version of this scene played out.

I’m at one end of the sidewalk and the patrol officer is at the other. I spy him noticing the red expired signal on my meter. Our eyes meet. He revs his Segway and starts to roll in that direction. I break into a sprint.

In slow motion I am charging toward my car as the patrol officer rolls full tilt on his Segway. I beat him by mere seconds and just manage to throw the first quarter into the meter before he can find a fresh ticket on his pad.

He gives me a knowing glare that says, “You got lucky. This time.”

The Segway Before the Horse

The battery-powered Segway HT uses five gyroscopes connected to a computer system that gauges the rider’s center of gravity more than 100 times per second to “self-balance” and enables the rider to travel upright at 12 miles per hour.

Inventor Dean Kamen envisioned his Segway HT as a change agent for urban planning, relieving traffic congestion and offering a zero-emission, fossil-fuel-free solution for people to use to commute and on the job.

Entities from police departments and the post office to FedEx and Amazon.com would flood his factory with orders. Consumers would clamor for their own.

Announcing the Segway HT on Good Morning America on December 3, 2001, Kamen predicted hundreds of thousands of sales and then leased a 77,000-foot manufacturing facility in Manchester, New Hampshire to meet that demand.

Kamen’s team lobbied state legislatures and municipalities all over the U.S. to permit Segways on the sidewalk. By the end of 2002, 32 states and the District of Columbia had changed their laws to accommodate them.

Critics who questioned the Segway’s safety were told that the company would offer four hours of training to purchasers. Kamen’s inner circle could not fathom how someone could try the Segway and not become enamored with it.

After the initial excitement fanned by Jay Leno, Sting and Russell Crowe tooling around on Segways on The Tonight Show, reality set in.

The U.S. Postal Service bought 40 Segways for a trial, but after mail carriers found that the HTs did not save time and were impractical in the rain, they passed too.

Disney was an early customer, but ordered dozens of Segways, not hundreds.

Segway delayed the consumer launch of the HT to work out training and safety issues and to establish it as a serious product by virtue of its corporate and professional sales.

Though none of those issues had been solved and professional sales foundered, the Segway HT became available to consumers on Amazon.com in November 2002. It weighed 80 pounds, traveled 11 miles on one battery charge and cost $4,950.

Not an easy sell.

Then came the crashes.

President George W. Bush fell off a Segway in 2003 while visiting his parents in Maine. Piers Morgan made fun of him, but then broke three ribs falling off one himself in 2007.

Ironically, James Heselden, who bought the Segway company from Dean Kamen in December 2009, accidentally rode one off a 30-foot cliff near River Wharfe in Yorkshire, England and died in September 2010.

Local emergency rooms fielded scores of adults and children injured in Segway accidents prompting Segway bans on roads and sidewalks in the United Kingdom, San Francisco, and parts of Barcelona and Prague among many other municipalities.

In 2004 Disney prohibited park visitors from using them.

The Inventor Inhibiting His Invention

The business press lampooned Kamen for what they perceived as a colossal failure.

I disagree. His sin was not failure. It was trying to market the product himself.

Kamen is a serial inventor with over 440 patents to his name. Before the Segway he had numerous inventions already in the marketplace including a portable dialysis machine that liberated patients from trips to a dialysis center and the iBot wheelchair which could climb stairs, scale gravelly terrain and raise users upright.

With every prior invention Kamen had struck a licensing deal with a large corporation to market the product.

Segway was his first attempt to market a product himself. He had no business or marketing experience.

Kamen’s prior invention success made it easy to attract venture capital funds. But as Chair of the company he saw two presidents resign in 24 months, lost his marketing manager just prior to the product launch and never hired anyone to handle sales.

Instead of spending time trying to clear the Segway’s path to sidewalks across the nation, Kamen should have been asking questions like:

Optimally those questions would have been answered and baked into the brand before launch.

Besides not doing his homework ahead of time, Kamen made some other common brand errors.

Few brands can survive such a premature launch and public misfire.

What saved them? Doing what they should have done all along:  understanding users’ experience, targeting specific audiences and addressing safety.

Segway is no longer one-size fits all. After getting law enforcement and security professionals’ input, the company now offers three Patroller models for security and police use.

Segway’s consumer offerings are smaller, lighter and less expensive. Each is specified for a different consumer segment.

Advances such as anti-tip technology, more comfortable foot-mats and gliding lights for better visibility in low-light conditions have improved safety and user experience.

Just imagine where the Segway brand would be if they had chosen this path in the first place!

Subscribe
Who Should Tell Your Brand Story?
The Secret to Getting Social Media Shares from Your Employees