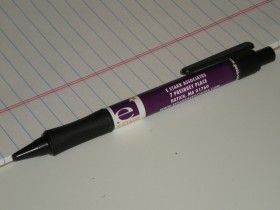 You know how your parents told you not to talk to strangers?  Well one day on vacation I not only spoke to a stranger, I invited her to my hotel room.

In October 1996 my husband Dan and I took an ABC Tour vacation to Asia.  My parents had taken the same tour six months earlier.  Among the highlights they mentioned were the free five-minute massages that they got from a group of Thai masseuses who hung out outside one of the temples in Bangkok.

The day we toured the temple, there they were. A couple dozen quiet-mannered Thais dressed in casual clothing and offering brief massages.  Each carried a small spiral notebook and pencil that they used to book appointments after the free massage was over.

When a young woman about five feet tall with dark cropped hair approached me and said, “You want massage?” I said sure.  Why not? It was free.  What did I have to lose?

If it is possible to experience heaven standing up in 100 degree heat at a crowded tourist attraction, this was it.

The woman’s petite size belied her strength.  She applied varying degrees of pressure to points around my neck and shoulders that released stress I didn’t know I had.  I was amazed at how much better I felt after just five minutes.

When she pulled out her spiral notebook and asked if I would like to book a massage for the next day in my hotel room, I found myself saying yes.  I also heard myself give her my hotel name and room number and set a time.

Then she said “thank you” and moved on to find her next prospect.  The interaction was so quick that I wondered if it had actually happened.

I also wondered about the wisdom of what I had just done.

Growing up in and outside New York City, I am a cautious traveler.  I keep close watch over my possessions and am careful about where I go and whom I talk to.

Why did I give a complete stranger my hotel information and invite her to come the next day without even knowing her name?  Or asking how much the massage would cost?

Because in those magical five minutes she had established my trust.  She had proven herself an excellent masseuse by giving me a preview of what I would get if I hired her.

Said otherwise, she had taken away the risk of hiring her by giving me a sample of her services.

Most humans are risk-averse beings.

Before we part with even a small amount of our hard-earned money, we want to know that it will be worth it.

Which is why sampling is the strongest tactic in your marketing tool box.

Faster than social media, able to leap discounts and advertising in a single bound.

Food and beverage marketers have known this for years, which is why you can sometimes eat and drink your way through your local supermarket.

But the secret is that sampling can work for just about any industry.

The power of sampling also explains why The National Pen Company invested in the production of the pen you see in the picture above.  They knew the most compelling way to get me to consider placing an order for their customized pens was to send me one.  I did consider it much longer than I would have with their letter alone.  And had the quality of the printing been a little bit better, I might have gone for it.

Which is why I invited that stranger to my hotel in Bangkok.

And guess what?  Dan had done the same thing with the man who had given him a free massage.

The next time day at the appointed hour, the man and the woman arrived and gave us side by side massages.  Ninety minutes and perhaps the best $30 we’ve ever spent on vacation.

Do you have a great sampling or vacation story to tell?  Please share it in the comments.

P.S.  To get more advice on sampling, read how Carbonite wowed me.

Subscribe
Uber v. Lyft: Whose Ride Are You On?
Can HubSpot Practice What It Preaches Profitably?