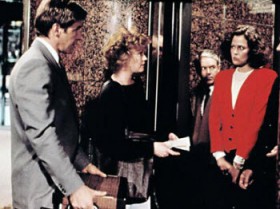 When I moved up to Boston after college, I knew few people in the area.  I found my roommate Judy through a service called the Roommate Connection.  Luckily she and I became fast friends and she kindly took me to parties that her friends threw.  Occasionally I met someone at a party that would lead to a first date.

One first date that sticks out in my memory went downhill faster than an Olympic skier.

His name was Joe and he was a PhD candidate at Harvard.  Not a medical doctor, but an eventual doctor from Harvard nonetheless.  So far my grandmothers would have had thumbs up.

We went to a casual restaurant and ordered our meals.  And then Joe began to talk.

He described in detail what the next seven years of his life would look like – the path of his PhD program and some sort of fellowship.

Then he pinpointed the precise time he planned to get married and have three kids.  And he began asking questions.

Did I want kids?  How many?  How old did I think I would be when I got married?  Did I plan to work once I married?

Whoa there fella!  We haven’t even been served our salads yet.

And though we still had two courses of food to go, I already knew there wouldn’t be a second date.

Being plugged into a predestined future was not what I was looking for.

But more than that, it was just too much information too fast.

Elevator pitches stress people out.  That’s because they were founded on the notion that you need to sell yourself in the time it takes to get from the ground floor to wherever your elevator mate is exiting.

It’s not true though.  Nor does it lead to an immediate sale.

Stop thinking of the elevator pitch as 30 seconds to make a sale and start thinking of it as a good first date.

What’s the goal of a good first date?  To have a second date with someone you would like to see again.  Aim to make enough of an impression so that the right people remember you and would like to know more.

Whew!  That’s much less pressure than closing a sale and much more fun and fulfilling.

It is important to have a concise and memorable explanation of what you do to build your network.  Done well, a good elevator pitch will help potential clients and referral sources identify themselves to you.

Think about it from the receiving point of view.  You don’t want to be sold.  You want to be engaged and understand what the other person is saying easily.

And like a first date, you don’t want too much information.

It sounds easy.  But for most people it isn’t.

And that included me.

I worked with Michael Katz, Solo Professional Marketing Expert, to develop my elevator pitch.  One of Michael’s best pieces of advice to me was: “When you get to something that works well, it will feel oversimplified to you.”

I’m a marketing consultant.  I specialize in working with consumer companies whose products and services are stuck in a stage very much like adolescence.  You know how some new products or services get off to a great start, chug along fine for a while and then stall?  What I do is help companies figure out what aspects of their marketing efforts are not working and show them how to fix them.  As a result they invest marketing dollars most wisely and get back to growing sales again as quickly as possible.

Ninety-one words.  If I need to be über-brief, I’ll just use the first two sentences – 24 words.

It takes some thought to come up with a working version of your elevator pitch.  But the benefits are worth it.  So pen a draft.  Then try it out.  Practice and refine it.

How will you know if your elevator pitch is working?  The response.  If you get confused looks, you need to revise your wording more.  If you get smiles and nods, you’ve got something that works.

And when you get that first, “hey, I know someone you should talk to,” you’ll know you’ve arrived.

The holiday season is the perfect time to work on your pitch.  You meet lots of people at gatherings who are there to have fun and are generally in a good mood.  Give it a go.

And that includes friends and family, who can be a great source of referrals.

I bet you are wondering how I lasted through that meal with Joe.  But the meal wasn’t the worst part.  It was the attempt at a parting kiss in the subway station!