Try Before You Sell 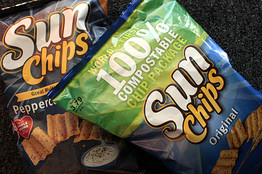 One day last summer my husband and I were in the kitchen coordinating preparations for a huge party when we were stopped in our tracks by a deafening noise.

It was my husband opening two bags of Sun Chips.

The din was unbelievable.  Not just loud, but pain-inducing to the eardrum.

As a result, neither of us was surprised when Pepsi Co. announced in October that their Frito Lay snack unit was ditching Sun Chips’ biodegradable bags on all but one flavor and going back to the old packaging.

If this sounds ridiculous to you, or if you never had the pleasure of experiencing this yourself, check out the 1-minute video at the link at the bottom of this post.

Guess what?  This is Pepsi Co.’s SECOND packaging fiasco in less than two years!

Yup.  In early 2009 Tropicana launched and then retracted a highly-touted new package after consumers complained that it looked too generic and ugly, and made it tough to distinguish between varieties.

The Tropicana package design alone is estimated to have cost Pepsi Co. $35 million. 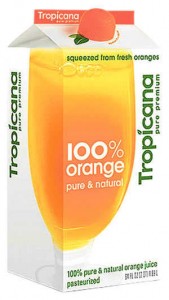 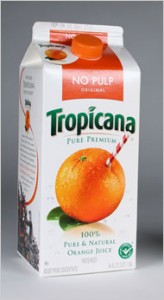 How could Frito Lay/Pepsi Co have avoided these costly packaging fiascos?

If you were shopping for a car, you wouldn’t want to just read or hear about the car, you’d want to try it.  You’d take it for a test drive.  You’d want to ensure it performed to your liking before making the investment.

The packaged goods equivalent to a test drive is sometimes affectionately called disaster check research.  The name evokes its purpose:  a last minute check before you flip the switch to authorize large scale production of the new product or packaging.

Packaged goods companies often invest heavily in early new product research and package development.  But just as often they skip the disaster check research due to product launch deadlines (which they control) or to save money.

Yet as expensive as all that upfront development is, a regrettable product launch is even more expensive.  Its costs include not only the monetary expenditure for production and distribution changes but also the public relations problems that arise when you deplete consumer and retailer goodwill.

You can lose some customers forever.  And you can look like an idiot, because most of these mistakes could be prevented by investing just a little more time and money in research before launch.

How can your company work smarter than Pepsi Co.?  Have a few of your target market customers test drive your product in its final form before you launch.

It doesn’t have to be an enormous quantitative test, if you can’t afford it.  Produce 15-20 prototypes exactly as the customer would receive them and let potential customers take them home, try them, and give you their feedback.

Even better, see if you can observe them using the prototypes in whatever environment they would normally use them – at home, at work, in their car.  (This type of research is called ethnography.)

And when you get their feedback, listen.  Really listen.  Make changes if you have to.  While you may be anxious to launch the product already, going back to fix or apologize for major mistakes later can be much more costly than running this last check in advance and making adjustments if necessary.

Get your product right the first time.  And you’ll avoid the unflattering reputation of a company that couldn’t avoid having a customer say, “I’m sorry I can’t hear you while you open that bag of chips.  That packaging is just so loud.”

Click here for the link I promised to a 1-minute video demonstrating  just how loud Sun Chips packaging was.

Subscribe
Talk to Strangers and Keep Your Mother-in-law Out
To Crash Is Human, To Backup Divine