Marketing Lessons from a Groundhog 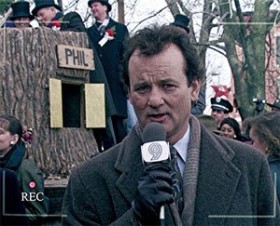 As I write to you this morning it is 24 degrees Fahrenheit and snowing.

When I moved to New England, I knew what I was getting into weather-wise.  I chose to go north.  Fall foliage might be spectacular, but winters would be long.

With the name ‘England’ in the region’s moniker, you don’t move here for the weather.

I assumed, naively, that native New Englanders were used to the weather and might even enjoy it.

Boy was I wrong.

After living up here for more than 20 years, I’ve noticed a cadence to the natives’ attitudes toward winter.  New Englanders brave the initial chills of late October and November with begrudging acceptance and mid-weight jackets or fleece pullovers.  In December the heavy coats come out and many hope for a white Christmas.

January’s intense cold incites complaints and prompts hope for a thaw.  Non-skiers who have school-age children often escape to a warm climate during the February school vacation.  By March, just about everyone is done with winter.

Of course this feeling isn’t limited to New England.  After hearing a forecast for more sleet in New York City last March, my friend Jay commented on Facebook “There’s a rodent in Pennsylvania that promised me an early spring.”

You know who he’s talking about, right?

Punxsutawney Phil, the groundhog who predicts how much longer winter will be every February 2nd.  As a child I was well aware of the legend, though I didn’t know the groundhog’s name until the movie Groundhog Day came out in 1993.

How did Phil end up in Punxsutawney, Pennsylvania?

The legend of Groundhog Day harkens back centuries and originated in Europe.  Early Christians celebrated Candlemas Day mid-winter and regarded the weather on that day as predictive. An early English song reflected:

If Candlemas be fair and bright,
Come, Winter, have another flight;
If Candlemas brings clouds and rain,
Go Winter, and come not again.

As the Romans pursued their conquest north, they conveyed the tradition to the Germans.  The Germans reasoned that sun on Candlemas day would cause a hedgehog to see its shadow, corresponding to a “second winter.”

Germans were among Pennsylvania’s earliest settlers.  When they arrived they found an abundance of groundhogs in several areas of the state.  Reasoning that as the groundhog resembled the European hedgehog, it would respond similarly and retreat to its underground hole if it saw its shadow to ride out another six weeks of winter.

The first Groundhog Day was observed in Punxsutawney in 1886.

Over time news of Phil and the holiday observance traveled.  Phil visited President Reagan in the White House and made an appearance on Oprah.

The tiny town of Punxsutawney is known to millions thanks to its dedication to Phil, the rituals of The Punxsutawney Groundhog Club and of course the movie.  Tens of thousands flock to the town each February for Phil’s early morning prognostication.

As you can imagine, tourism brings in much income to Punxsutawney and many surrounding communities around Groundhog Day.

Here’s the thing though.  According to the National Climatic Data Center, Phil’s accuracy is worse than a coin toss (39%).   And that’s part of what irked Jay last March.

It seems accuracy – or lack thereof – doesn’t dim the excitement.  Entertainment and fun trump accuracy and keep people coming back.

Meteorologists and sports commentators have known this for years.

Rather than rue the accuracy point or the length of winter, focus on the lesson of how entertainment and fun can draw a crowd and keep them coming back for years.

Think about creating or harnessing a meaningful event and promoting it to grow your brand.  Hallmark is the grandmaster of this, promoting holidays like Valentine’s Day, Mother’s Day and Father’s Day as card-giving occasions.

But you don’t have to be Hallmark to make this work.  And many brands take the opportunity to give back to the community this way:  The Life is good Festival, the Avon Walk for Breast Cancer, and Ben & Jerry’s Free Cone Day are great examples.

To put Phil’s magic to work for your brand:

Make your event a focal point for your marketing.  And if it happens to help break up a long winter in a cold climate, so much the better!

Subscribe
Tell Me A Brand Time Story
Get Personal