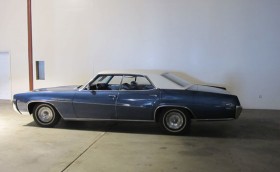 Last Wednesday, my husband Dan and I took a two-hour course on the Massachusetts junior operator driving laws with hints on how to teach our son AJ to drive.

Like every other childhood milestone, approaching this one for my son conjures memories of my own experience.  Being the eldest child in my family, I believe it was my driving education that caused my father’s first gray hairs.

I learned to drive on a 1969 Buick Le Sabre.  It had an eight-cylinder engine and over 100,000 miles by the time I got behind the wheel.  It resembled the picture above, but the body of it was chocolate brown.

I loved that car.  It provided independence and got me to and from my college interviews safely.

When I went to buy a car, however, I did not consider buying a Buick.  It was a great car to borrow from my parents but not even remotely attractive to me as a 20-something single person.  I bought a Honda Civic.

Finding a way to appeal to younger buyers has bewildered several long-standing car companies.  Failure to do so killed one of them.

Remember “This is not your father’s Oldsmobile?”

GM attempted to attract younger buyers by shifting the Oldsmobile brand from the traditional values it embodied to something they tried to portray as hip and cool.  Younger buyers balked.  Oldsmobile’s existing customer base felt alienated.

Major marketing missteps can destroy even the most venerable brands.

Toyota has tried to appeal to younger buyers via a separate brand called Scion.  Scion, which Merriam-Webster defines as “a person born into a rich, famous or important family,” was meant to refer both to the brand’s Toyota lineage and the Generation Y demographic that it targets. Generation Y, also called Millennials, includes people born in the 1980s and 1990s.

Scion launched with success in 2003 and grew to its sales peak in 2006. Hit hard by the recession, sales have plummeted and the brand has stalled since then.

The press has laid blame in many areas from the quirky designs to the splintered price levels (billed as entry level cars, its sporty model costs $26K) to the separate dealership area where customers must go for Scion purchase.  Scion’s marketing has also come under fire: they have been hosting events for new and eclectic musical acts as well as funding their audio and video recordings.

But I think the problem goes deeper than all that.  Scion is a typical brand in adolescence having an identity crisis.

Launched to appeal to millennials, Scion hasn’t figured out the problem that it solves for them.  Saying their line offers cool entry-level cars isn’t a solution that is working for the brand.  There are plenty of entry-level models in the marketplace and cool is in the eye of the beholder.  (Toyota’s Corolla, a frumpier design for sure, sells multiples of Scion’s total line, many of them to millennials.)

Moreover, millennials aren’t frozen in time.  When Scion launched, the oldest in the group were just graduating college and looking for their first job.  Now they are approaching their mid-30s, with the bulk of their cohort at least 25 years old.  The image they sought in 2004 may not be what they seek now.  Their needs may have changed.

To navigate its brand adolescence successfully, Scion should:

To keep your brand on track, make sure you know and can articulate what problem you solve for your target market.

I have no idea what car AJ will purchase when he is ready, but I doubt nostalgia for my Honda Pilot will factor into his decision.

What car did you learn to drive on?  Share your experience in the comments.