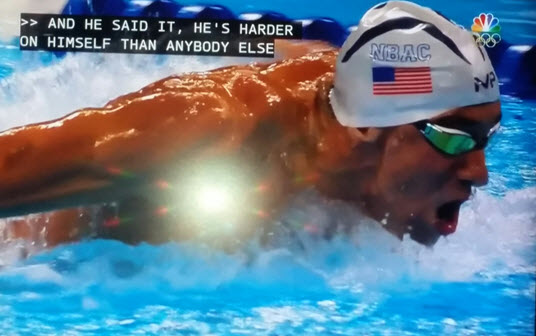 Do you know who Michael Phelps is?

Unless you have been living behind a boulder, you probably do. (I avoid clichés.)  The 31-year-old swimming phenom has 22 Olympic medals, 18 of them gold, and has set numerous world records.

Phelps’ main rival, Ryan Lochte, has 11 Olympic medals.  Without Phelps present Lochte could be considered the best male swimmer of all time.  But he happened to come of age at the same time as Phelps and therefore has an underdog position to him.

Sort of like Dustin Hoffman getting an Academy Award nomination in 1983 for his fabulous starring role in Tootsie only to come up against Ben Kingsley in Gandhi.  (And yes Ben Kingsley is an amazing actor, but I really wanted Dustin to win that year.)

Michael Phelps retired from swimming after the 2012 Olympics, his fourth Olympic appearance.  Instead of savoring a Phelps-free Olympic opportunity, Ryan Lochte bet him $1000 that he would come out of retirement to compete in Rio at the 2016 Olympics.

But Lochte hasn’t collected any money.

It’s not that Phelps wouldn’t pay him.

Here’s what Lochte had to say about Michael Phelps in a Sports Illustrated interview with Maggie Gray:

“I guess you could say we have one of the best rivalries in sports. You know we help each other out.  We push each other.  You know he’s one of the world’s greatest swimmers.  And I mean we hate to lose.  So every time we go on those blocks it’s every man for himself.  But you know at the end of the day, win or lose, we’re still going to be friends.  We’re still going to play cards together.”

Fierce competitors by day and card-playing friends by night.

What’s up with that?

It’s not just the camaraderie of the U.S. swimming team.  Ryan Lochte knows that he has become a better swimmer from competing against Michael Phelps.

And just as rivalries propel Olympic athletes to higher levels of personal performance, brand rivalries have propelled companies to greater success and more creative innovations than they would have had without the head-to-head competition.

Think Coke and Pepsi.  MCI and AT&T.  Dunkin’ Donuts and Starbucks.  Nike and Reebok then; Nike and Adidas now.

Netflix bested Blockbuster.  But that wasn’t the end game for them.  They have reconsidered their brand position and have set their sights on a new rival:  HBO.

Why has singling out a major competitor for a rivalry worked well for most of these brands?

To tap the benefit of a rivalry for your brand:

So will Ryan Lochte ever get his money?  Here’s what he said about the bet:

“I think it was just a good old-fashioned bet that we had going on.  I don’t really care if I collect on it or not.  I’m just glad that he is back in the water.  And I think that was kind of the main goal of that bet was getting him back in the water and representing Team USA.”

I’d say he has gotten his money’s worth.

Do you have a key rival that you’ve targeted to motivate your brand team?  What have you learned from them?  Would you play cards with their owner?

Share your answers in the comments.  I love a good rivalry story.

Subscribe
How FitBit Stays Fit
How to Use Surveys Strategically